A Week in (South) Korea

I know I haven’t blogged in months, and it will probably be another few months before I post again.

South Korea was both familiar and unfamiliar in many ways. For starters, many people get “catch feelings” if you refer to their country as “South Korea”. To them, it’s just Korea, officially the Republic of Korea (ROK), and they have a different name in Korean for the country to the North – which by the way, is grayed out in their maps. This Quora Thread explains it better.

Having lived in Japan for close to 3 years, ROK to me was refreshing. I was reading this blog post of a traveler who said she found Korea “ugly and cold” – imagine that! – while praising incredible Japan as “vibrant and mannered”. I couldn’t disagree more. I found Korea bright and welcoming, especially Busan. In fact, my friend thought it was a little too cheerful.

Japan is very, very good to tourists and short term visitors, so I would guess that’s why her experience was incredible. But for long term-residents, we start to notice the difference between politeness and friendliness. Many visitors mistake the former for the latter. A mid-to-long term resident will tell you hard it is to make friends in Japan. And one person left comment on the former blog summing it up appropriately ” Koreans make much more loyal long term friends, the Japanese are quite friendly at first, but much colder in the long run.” So far I have one Japanese friend my age. I have a few close friends, but they are over 50, up to over 70!

Meanwhile in S.Korea, many people may appear brusque, but they are quite warm and I enjoyed my time there.  One of my friends in Seoul tells me he has quite a long list of friends. Would it make a difference if I lived in a large city in Japan? I don’t think so.

We spent 6 nights, 7 days in Busan. Getting the visa was a breeze (since we live in Japan, I bet it would be a different story if I were applying from Kenya). We had to drive to Niigata to apply for it though, which is a road-trip adventure that requires its own blogpost.

It rained almost the entire time we were there.  At least the rain kept the summer temperatures cool. We spent the only dry day on the beach, and on the rest of the days we explored a bit of Busan. Below, a few pictures from the trip. (More on my Instagram):

Gamcheon is a colourful collection of little houses on a mountainside. Very uplifting view on such a rainy day.

After lunch at the village, we headed to the tallest point in Busan, Busan Tower, which is located in Yongdusan Park.

A view of Busan City from the tower. 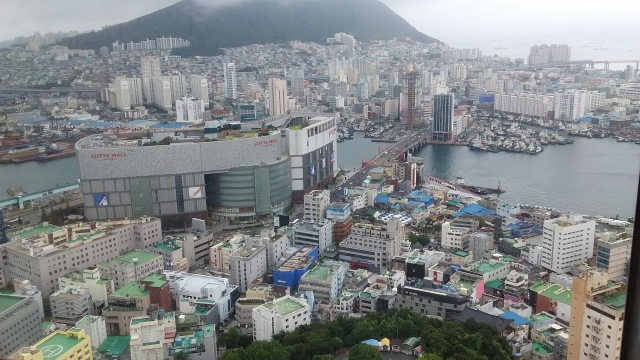 We did a little shopping, and finally went back to the hostel we were staying at, appropriately(!) named  Kimchee Guest House.

Day 2, Tuesday the 15th: What’s that Bin in the Toilet? And Haeundae Beach

After noticing a sign in the toilet saying “do not flush paper towels”, and an open trash bin that was quickly filling up with soiled toilet paper, it hit me that  oh no.. used toilet paper isn’t flushed!

Culture shock: bins for used tissue paper in the toilet. In some places, they don't flush toilet paper. I can't deal 😔

I continued to flush anyway, out of habit.

It didn’t rain, so we headed to Haeundae Beach. South Koreans definitely have a beach culture. The beach chairs, umbrellas, floating tyres all for rent. The beach was also packed full of people, swimming, napping, lounging.. something you can hardly find on the beach here, even the cleanest ones on the warmest summer day.

Jeremy thoroughly enjoyed playing in the sand, even more than in the water. 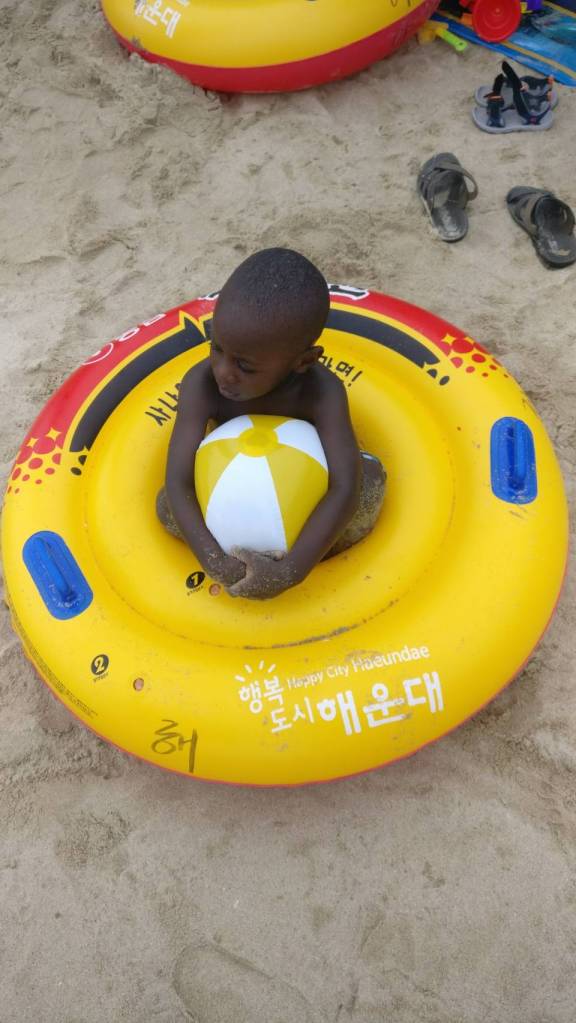 Later, on the way home, we took a detour through Dongbaek Island, which offered night views of the buildings on the mainland. Unfortunately, my phone takes shit photos at night.

Day 3, Wednesday  the 15th: A bit of rest  China Town and Eulsukdo Island

It was raining again, so we stayed in a bit, then headed out after lunch for China Town and to see a bit of Eulsukdo Island. The Island itself wasn’t noteworthy but it had a number of interesting statues and a lot of greenery so we enjoyed relaxing there. 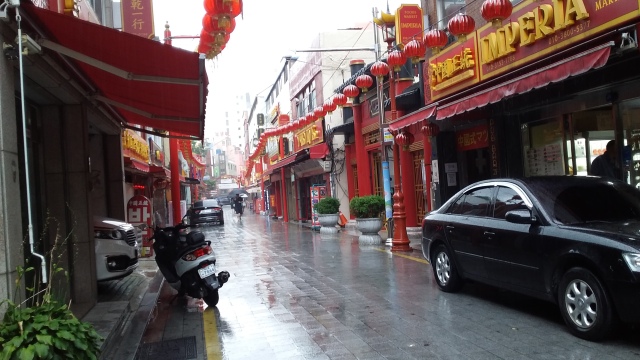 China Town in Busan where a lady with a cigarette dangling on her mouth invited us in for Russian vodka. It was at 2pm, and I was with a 4 year old, how?

The highway leading out of Eulsukdo Island. A lady with a boy about Jeremy’s age, with whom we rode the subway together to the last stop, offered to pay for our fare on the bus to the island. Thank you, kind lady!

Day 4, Thursday the 17th: Train to Seoul, Incheon, and Gangnam at Night!

We had to wake up really early (7:30am on a holiday!) to catch the 9am regular train to Busan. The high speed train (KTX) was costing a bit more and we weren’t in a hurry. Witnessed some lovely views along the way.

Seoul was a little underwhelming. After cheerful Busan, Seoul was just there.. luckily for us, my friend whom I had last seen in 2010 during the Young Writers Program, was there to meet us at the station and took us to the tourism district where we looked around. Didn’t really shop much though. I had to leave early because I was getting on the subway to go to Incheon to meet up with my other friend who’s an expat there, Bernadette, who was hosting us that night.

I had traveled with a friend from Japan who watched Jeremy that night as Bern and I went to check out Gangnam, as in Gangnam Style. It was a Thursday night to remember. Especially with photos like these: 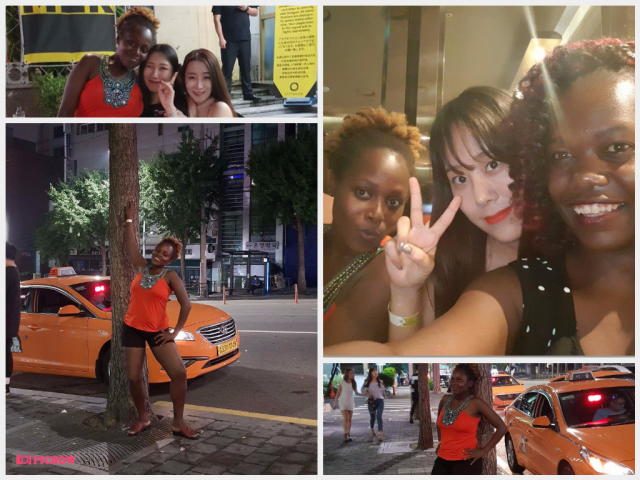 Partying it up Gangnam Style. Ignore the sandals..

We had actually arrived on Sunday 13th so technically, this was day 6.

Tired and road-weary, we got a KTX train in the evening from Seoul Station. We arrived in Busan 2.5hrs later, and went straight back to Kimchee Guest House for our last night.

I left Busan having made cheerful memories and I hope to be back someday. There is so much more to explore.

For pure vanity, here is a postcard of myself from Busan.

Meeting Mereb was definitely a highlight of my trip to Busan. Hope to see her again, because she is going to be in Seoul for another 2 years.

Everywhere we went, people marveled at Jeremy. They were not shy in expressing their curiosity and interest. They gave him sweets and treats, even money one time! He is at such an adorable age, so I was content to let it be as long as he wasn’t feeling disturbed.

I met another girl at the hostel called Nancy, from Canada. She was so lovely and friendly. Later in Seoul, I walked into a coffee shop to get a Latte, and there she was again!

Nancy, I am sure we’ll meet again sometime in the future 🙂

This entry was posted in South Korea and tagged Busan, Seoul, South Korea. Bookmark the permalink.

5 Responses to A Week in (South) Korea