To the Beach House

Read part 1 and part 2 of this story here.

Unrelated: the title of this post reminds me of Virginia Woolf’s book, To The Lighthouse.

Toru and I planned to go to his beach house the following Sunday. However, that day was so rainy. We decided to make the drive either way.

Let me back up a bit. When Vi was here, we rented a car and enjoyed a slow drive to Hakone. Initially, we wanted to rent a nice car, like a BMW. Then put on nice outfits, great music, and “stan” our way to the ryokan we were staying at. Turns out the rental prices for nice cars was way out of our price range and we had to contend ourselves with a cute Vitz. With Vi on the passenger seat doing the navigation, we joined the Tokyoites escaping the city for a quiet weekend. We got lost a couple of times on the way and it was crazy backtracking and finding our way back. I totally blame the navigator (side eye to Vi).

The garden at Yoshiike Onsen in Hakone, where we spent one night.

Okay back to the story. On the drive there and back, we observed so many cool cars. Sports cars. Convertibles. We were totally envious. Vi wanted to be a driver of one of such cars, while I wanted to be on the passenger side.

“You know you have to got to look the part if you want to sit on the passenger side of one of those cars.”

No natural hair manenos. Must be a long flowing wig/weave. Sunglasses are compulsory. A dress in a bold colour. Fake nails. Six inch heels. You know what I am talking about?

So I called Vi to update her on the latest.We both agreed that Toru seemed like a guy to drive a nice car. This sent me into a panic as I have never in my whole life had fake nails. At least I had some nice boots I had bought recently at Harajuku. I sent Vi a photo of myself all dressed up for the drive and she texted back, “you look like a socialite.” Aww, when your girlfriend comes through with the right compliments.

Toru texted to say he was on his way to pick me up.

He pulled up in a really, really nice… family van!

I got into the passenger side and we slipped into easy conversation. He put on EDM music. On the way, we stopped by a coffee shop to get some drinks and snacks. We joined the highway and the views through the city were really nice.

Part of the way was a tunnel under the sea. Felt like a normal tunnel but it was cool knowing we were driving under the ocean. We stopped briefly at a convenience store once we got to Chiba and then drove the rest of the way though a rural-like setting.  We got to the beach apartment two and a half hours later.  It’s an apartment on the top floor with an amazing view of the ocean.

The weather remained stubbornly cloudy. We could hear and see the waves crashing against the beach. It was rough weather, there was no way we were going to venture to the beach.

We turned up the heating, ordered takeout and watched TV. It was the perfect weather for chilling indoors and getting to know each other.

He had taken some work related calls on the drive. The conversations went something like:

So I had been right. He was the owner of the company. He told me had started up his company at 32. Admirable. An entrepreneur in Japan when you can be a salary man for life! I will be 32 next year and I don’t think I have the courage to set up my own business yet.

I accused him of running a black company haha. His employees were calling him on a Sunday. He assured me his employees get up to a month off in a year. It’s actually him who’s always on the clock. 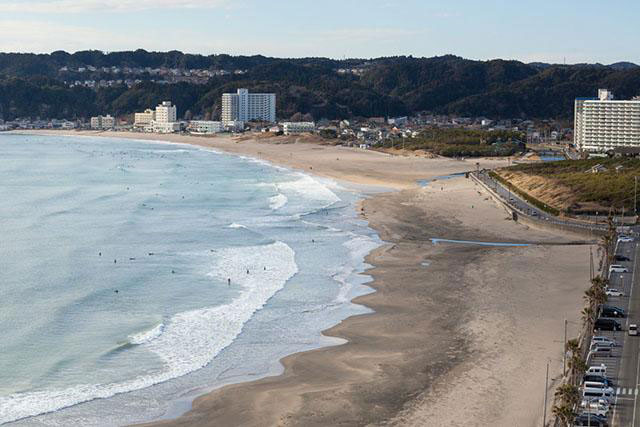 The beach in Chiba.

It was already dark by the time we were driving back to Tokyo.

<< This is probably the end of this series. Yes, we are still dating. But I would like to keep this story private from now on.  It’s been a nice so far, and a great distraction from the recent troubles>>

This entry was posted in Blog, Life in Japan, Relationships and tagged beach, life in Tokyo. Bookmark the permalink.

5 Responses to To the Beach House