I just want to stay in bed all day!

I have been feeling pensive lately. You would that think finishing my PhD will leave me feeling nothing but ecstasy, every step I take feeling like I’m walking on sunshine. I thought so too. That I would be elated, high on endorphins all day. So the dip in the mood was unexpected. When you work so hard for something, and then you achieve it, it can be hard to move on from what you have held onto for so long. You reach the goal and then realize you forgot to think, what next? It can be terrifying knowing you are approaching the end of one familiar chapter of your life. And you have to open the next chapter, not knowing what it will bring. I have followed a fairly predictable life the last 4 years; but now that it is time to move on, I am a mixture of anxiety and excitement. I am not sure which one I feel more than the other.

Being my own shrink, I always try to find out could be the cause of whatever I am feeling. I talked with my friend Vi who told me it could be because I’ve finished school. After decades of schooling, it’s finally over. This morning, I decided to google “post PhD blues” and I hit jackpot. Post PhD Blues are real so if you are a PhD student, be aware and be prepared. Imagine you are Frodo and you’ve journeyed all these years to destroy the ring, you’ve done it, it’s over. What next, Frodo, what next?

It’s been over 3 weeks since I successfully defended my thesis and I am kind of slowly getting out of the funk. There is so much to look forward to, including my graduation next month. My parents and brothers are coming to Japan and I haven’t seen them in almost 2 years! I am also going to change apartments in late September (I hate moving so this is  not really something to look forward to!) and then going to Kenya in late October for a long overdue holiday (I’m coming home!).

In an attempt to get over the blues, I decided to look back at the year so far and reflect on what I have achieved so far. In other words, to take stock. I don’t do new year’s resolutions, I just set goals for the year. Here is what I set for 2018: 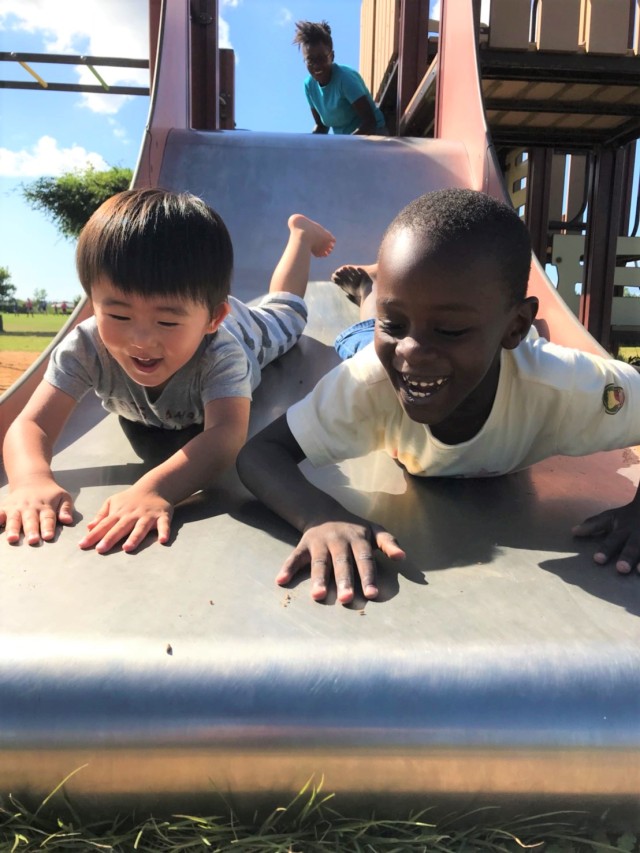 Jeremy playing with his friend Joe at Kibagata Park in Komatsu.

He’s a really friendly, energetic and smart boy. I’m not just saying that because I’m his mother. I should  make more of an effort to teach him English though; Japanese has now become his primary language. He even dreams in it. Really can’t be helped because he spends most of his formative time in the kindergarten where everything is in Japanese.

2. Write my thesis, defend it and graduate

I did the test in July and passed! There is still so much learning left to do though. It is one thing to pass the JLPT, it is another thing to navigate the real world in Japanese. I still can’t read the newspaper, I have a hard time following the news (whenever I catch a glimpse of it) and the business environment uses a formal level of Japanese that even natives struggle with.

I spent a week in Las Vegas in July and I had the time of my life guys! From getting 2nd row seats in a Mariah Carey concert to a bus trip to the grand canyon. Las Vegas for me lived up to its image.

Bathroom selfie in the mirror with my friend Bern before the Mariah Carey concert.

I got my dream job guys! At a top global company with HQ in Tokyo. In RnD: Cloud computing/IoT Research. I’ll start in April next year. In Japan, it is common for students to get jobs one year before graduation. Japanese companies invest in their new employees and will retrain them if necessary, because you are expected to be employed for life. Until I start at the company, I’ll be a post-doc researcher in the same lab, so I’ll still in JAIST for another 6 months from October.

6. Take care of myself

It’s just that I am reporting the results of years and years of hard work. I don’t blog about the tears, the sweat and the blood. I don’t write about the sleepless nights, the cups of coffee, the stress over bills, the hustle of waking up at 4am to catch the bullet train to Tokyo in time for my interview then coming back the same evening to Ishikawa so I can pick Jeremy up from school. I don’t tweet about the anxiety of whether my thesis is good enough. I don’t inform you, dear readers, that the cost of going to Las Vegas was taken care of by my school because of I was mainly going there for a conference. Perhaps I haven’t let it slip that I have worked several part time jobs just to make ends meet and to save a little on the side. For sure, I haven’t mentioned that there are days when I can’t seems to get out of bed, when after I take Jeremy to the school bus stop, I go back to bed for the rest of the day asking myself what’s the point of it all. I’ve probably consumed more caffeine, alcohol and tobacco than’s good for me. So don’t buy all the hype!

It is important to take care of ourselves. Mentally, physically, emotionally. My escape is books, I read a lot whenever I can. I should start exercising again, it’s been months since I was last in the gym, but I swim from time to time.

This summer (on Aug 4th) I finally went paragliding. It was only about 15 minutes long but totally worth it. 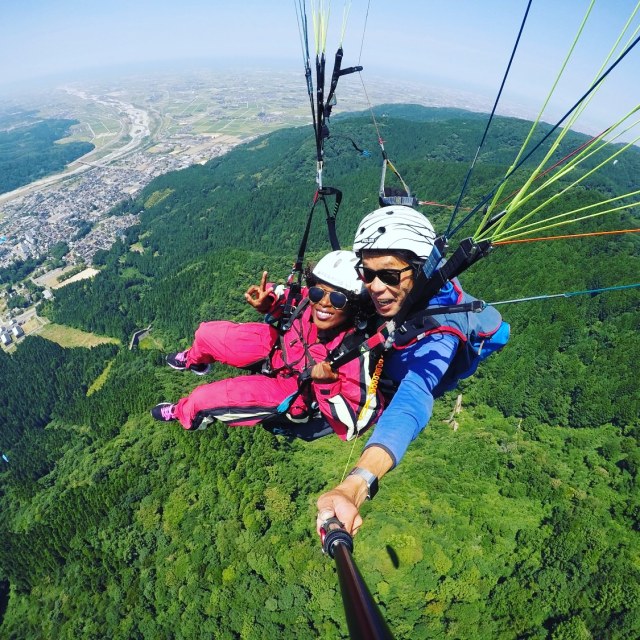 Two weeks after that, together with 3 of my friends, we climbed Mount Haku, one of Japan’s 3 holy mountains. (The other being Mt. Tateyama and of course Mt. Fuji). It was tough going. Our legs were jelly by the time we came down from the mountain the following day. But it was definitely worth it and I would do it again.

The sunset was nothing short of stunning.

In the weeks since the final defense I have kept busy attending several festivals that are common in summer in Japan. I’ve even been to a 3-day kids camp with Jeremy, and we’ve been to an amusement park, the pool, the beach… Now I feel like I need a day off to just do nothing. To think about my future and what I plan to do in my 30s. It’s like I had put my life on hold during the PhD but now it’s time to live again.

That was my goal for 2018 and so far I am on track.  If you are interested in what I’m reading you can check out my goodreads profile. So far I have read The Light Between Oceans by M.L. Steadman, The Remains of the Day by Kazuo Ishiguro, Murder on the Orient Express by Agatha Christie, The Temple of the Golden Pavilion by Yukio Mishima, Harry Potter and the Cursed Child – Parts One and Two (Harry Potter, #8) by John Tiffany, Born a Crime: Stories From a South African Childhood by Trevor Noah, When We Were Orphans by Kazuo Ishiguro, Freeing Shadows by Lucia Kombe and most recently Pachinko by Min Jin Lee.

I am not sure what I will read next, but most likely a compilation of short stories by Roald Dahl.

This entry was posted in Uncategorized. Bookmark the permalink.

6 Responses to 2018 So Far: Taking Stock and Post PhD Blues